The store will not work correctly in the case when cookies are disabled.

Pneumatic valves work with compressed air. Their application spectrum is very wide. Whether as a manually operated single valve or complex valve system, they are used in many industries, in automotive engineering and in many everyday applications. Manufacturers include Univer, FESTO und SMC. Often, the valves are used to control pneumatic Cylinders & Drives.

Basically, they can be divided into directional valves, shut-off valves, flow control valves and pressure valves. Directional control valves can interrupt the path of the compressed air, release it or change its direction. This creates a control function, for example for a tool on a machine. Block valves allow compressed air to flow in only one direction. These are used, among other things, as a check valve or vent valve. Flow control valves influence the amount of compressed air flowing through, such as throttle valves for controlling the speed of a drive to be controlled. On the one hand, pressure valves are available for pressure regulation in order to keep the outlet pressure constant independent of the inlet pressure. On the other hand, there are variants that deliver a switching signal as soon as a certain pressure is reached. A pressure relief valve releases compressed air if a preset value is exceeded.

In addition to the valve type, it is important to note other important parameters of the pneumatic valves. These include: 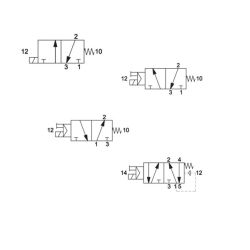 When pneumatic valves are used as directional valves, a distinction is made between several combinations of possible paths and positions. You can recognize this by notes or by the options in the product descriptions. There is for example "5/2-way" or "3/2-way". The first digit stands for the number of connections of the valve and the second for the possible switching positions. A 2/2-way-valve has two connections: a pressure and a working connection. In addition, two switching positions are possible with him: open and closed. With 3/2- or 5/2-way-valve there are ventilation connections in addition to the pressure and working connections. There 5/3-way-valve are. In addition to the classic, there is a third shift position, the middle position. The nature of this path-connection combination affects the flow behavior of the compressed air and allows various forms of control with pneumatic valves.

Slide and seat valves and their type of actuation 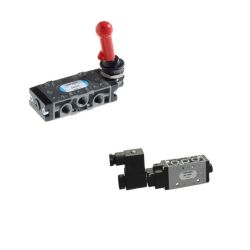 Directional control valves are available in two designs - as a slide valve or Seat valve. With a slide valve, a profiled slide moves in the valve, opening and closing channels in this way. With a seat valve, two rubber plates seal the airways directly. Consequently, this variant only allows two possible switching positions - thus there are no 5/3-way seat valves. Also, in contrast to slide valves, the air can only flow in one direction. For a seat valve switching paths are shorter, causing the valves react faster. Even higher flow rates are possible. Poppet valves are also always monostable and require a higher minimum working pressure compared to spool valves. For both seat and slide valves, see the product descriptions for hints and sometimes choices regarding the type of actuation. This means the method that triggers the switching process on the valve. There are mechanically operated valves, pneumatically actuated valves and solenoid valves. Mechanically actuated valves operate, for example, with a follower roller or a spring. Manual control is also possible, for example with foot valves. Pneumatically operated valves trigger the switching process with compressed air. In contrast, solenoid valves control the compressed air by means of a solenoid activated by electrical switching pulses.

Nanovalve ISO 15218 and other miniature and pilot valves 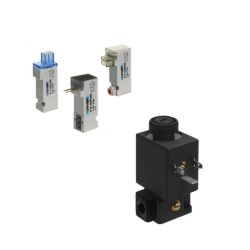 You will find mini, micro and nano valves with small dimensions. These are often used as Pilot valve for the pilot-operated valve variant. Pilot valves are available as solenoid valves and pneumatically actuated valves. If a pilot valve is opened, the compressed air can flow through and actuate the pilot operated valve. In contrast to the directly mechanically, pneumatically or electrically actuated valves, this requires a lower switching pulse, which is a great advantage in many applications. Also in this area different ways variants and switch positions are possible. For electromagnetically operated models, also pay attention to the type of current consumption, the permissible voltage and the electrical connection. The connections of the small valves are often standardized, as with the nano valve ISO 15218. This facilitates the assembly and subsequent maintenance work, since products from different manufacturers can be combined. 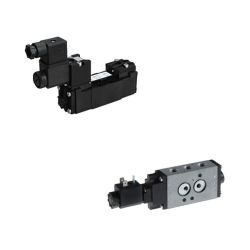 In addition to the nano-valve ISO 15218, there are many other standards in the field of pneumatics for uncomplicated assembly and better maintenance and repair conditions. Examples are the standard valves ISO 5599/1 and valves according to NAMUR standard. The connections are standardized in these cases. The valves themselves can have different designs. Standard valves according to ISO 5599/1 can be mounted on appropriately standardized manifolds. With these it is possible to assemble valve systems, a very efficient form of assembly. Among other things, the ISO standard determines the dimensions of the valve base and the marking of the connection openings. Valves according to the NAMUR standard have a standardized interface to the respective drive, which they are to control.